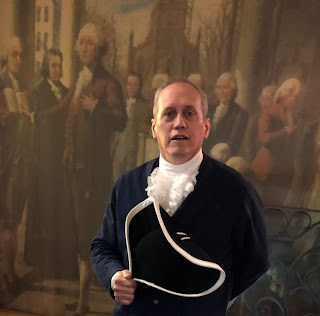 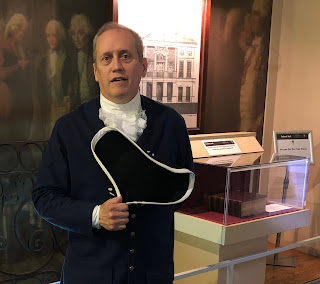 As part of the quest to make John Jay known to New York City, New York State, the United States and the World, Phil Webster performed at Federal Hall on the Fourth of July, 2019. My talk focused on what happened in New York City on July 4, 1776. Philadelphia gets all the attention. Why didn't John Jay sign the Declaration of Independence? In a letter to Edward Rutledge on October 11, 1776 he gives the following reason why he has not left New York.

"Although extremely anxious to be with you, the circumstances of this State will not admit of my leaving it. Governor Tryon has been very mischievous: and we find our hands full in counteracting and suppressing the conspiracies formed by him and his adherents." British Royal Governor William Tryon had to rule the state of New York from a ship off Battery Park. He did not want a Whig/Patriot government taking over his territory. This was much like Governor Dunmore in Virginia who had to rule from a ship down there as well. Tryon's mischief included paying people to take part in the plot to kidnap and kill General Washington. Jay as Chairman of the Committee to Detect Conspiracies questioned many people and determined that Thomas Hickey (one of Washington's Inner Guards) was a part of the plot. A crowd of 20,000 witnessed the public hanging of Thomas Hickey on June 28. The next day June 29, 1776 the British fleet arrived in the New York City area.

If you would ever be interested in having a John Jay presentation, please let me know at PhilWebster1776@outlook.com

Phil Webster
Allow me to introduce myself. My name is Phil Webster and I speak at churches and civic groups about the Christian worldview of the Founding Fathers. While doing my presentations I appear in character as John Jay. I have written a book entitled Can a Chief Justice Love God?: The Life of John Jay (Author House, January 2002). My second book is entitled , "1776 Faith" which is based on reading the 25 volumes of the Letters of the Delegates of the Continental Congress. My research shows me that at least 54 of the 56 signers of the Declaration of Independence are guilty of a Christian worldview (possibly more). To confront the attacks of those who say that the Constitution is godless because it does not mention God, I have written a third book, "Constitutional Faith." The Christian worldview of the signers of the Constitution is shown by their pithiest Christian statements. All 50 states mention God in their state constitutions.